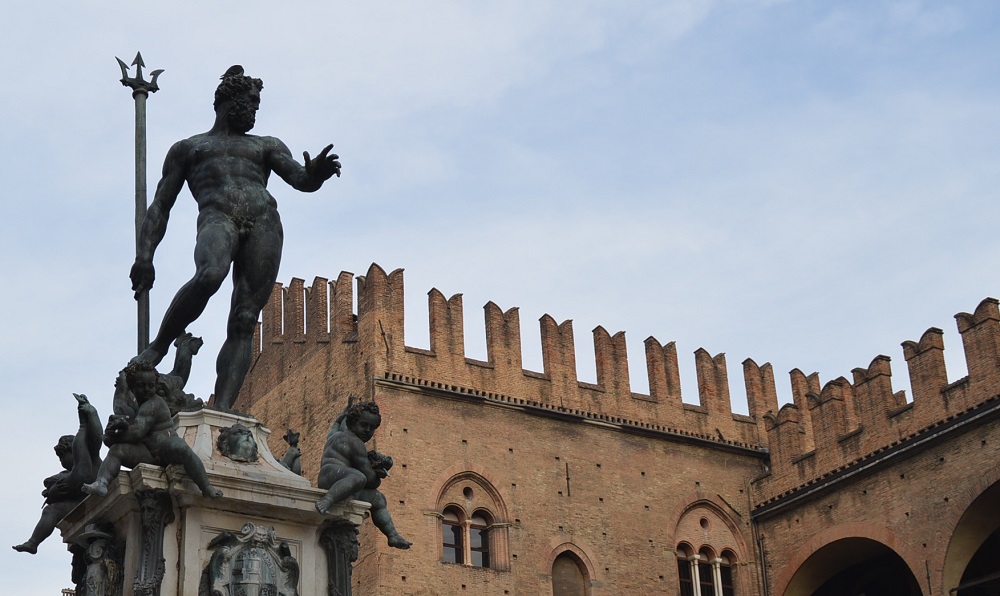 A sunny winter Saturday in Bologna.

When you arrive to Bologna by train from the north for sure you notice on your right , on the top of a hill, a very nice church. This church is the sanctuary of the “Madonna di San Luca” the most well known symbols of the city for Bolognese people that are devote to the image of  Holy Mary that is there. Even for me it is really reassuring seeing it every time I come back from a trip.

Well I arrived on a sunny , cold Saturday at Bologna train station and I  started my walking tour in Bologna with a group of friends . Just outside of the station we noticed the clock stopped at 10.25 , remained like this from 1980 as the symbol of the massacre of the terrorist attack that occured in August of that year and which killed 85 people and wounded more than 200.

Than we started walking towards the city center. Even if I know Bologna since I was a baby , every time I walk through its narrow street I find something that surprise me, a building or a little corner .This time the first thing that made me smile was the inscription on a colourful shutter of an ice cream shop that was closed for winter season (it does a really good ice cream!).
It was written: “reopen at the end of February … weather permitting” . The Bolognese are funny and friendly people!

We walked to the end of via Galliera under long porticoes, which are a special feature of Bologna. In the city  there are about 40 Kilometres of porticoes so it is really easy to stroll around and go shopping or walking from one museum to another under a safe shelter away from both bad weather and the scorching sun.

We arrived in via Ugo Bassi , one of the main streets of the center that on week-end are pedestrian . It’s very nice to see many people walking around with shopping bags or just enjoing the city without cars.
From this street it’s easy to undersand why the Bolognese say that one of the three T of Bologna are the TOWERS , since at the end of the road rise up in all their beauty, the two most important towers of the city : Torre degli Asinelli and  Torre della Garisenda. They are very impressive and they look as if they’re falling into one another.

Torre degli Asinelli is the tallest leaning tower in Italy and it’s possible to reach the top walking up 498 steps .The panoramic view of the city from there it’s breathtaking!
Then we continued our walking tour to Piazza Maggiore the most important square of the city, center of the religious and civil life. In the middle there is Fonatana di Nettuno (Neptune’s fountain) and around ancient medieval buildings.

All the buildings are beautiful and impressive but one kept our attention ,  the Basilica of San Petronio, the most important church of the city. This is the last big Gothic church realized in Italy , but the thing that make it peculiar is the fact that the façade is not finished.

Next to San Petronio a narrow street brought us to the gastronomic side of the city! Little shops full of typical food like mortadella , prosciutto , salame , parmigiano reggiano and home made pasta. Yes , here we found the other two T of Bologna , TAGLIATELLE and TORTELLINI!

This is the old medieval market and food shopping area, the Quadrilatero, whose tiny cobblestone streets are framed within a quadrilateral area by Piazza Maggiore, via Rizzoli, via Castiglione and via Farini. The market has occupied the same area in the city center since Roman times. Bologna boasts in fact one of the richest culinary traditions in Italy.
Some of the typical dishes, renowned all over the world, are “tagliatelle al ragù“, “tortellini in brodo“, “lasagne“, “spuma di mortadella“and ” friggione“.

Tagliatelle al ragù : this dish is a combination of two Bolognese traditions coming together in perfect harmony, the ragu and the fresh egg pasta cut, strictly by hand, in varying lengths and widths.
Tortellini in brodo: a delicious fresh egg pasta filled with meat and cheese and served in a meat broth.
Lasagne: alternating sheets of fresh pasta with bechamel sauce, ragu and cheese. Usually the pasta is green because the dough is made with spinach.
Spuma di mortdella: a simple but tasty starter made of mortadella, Parmesan, ricotta cheese and fresh cream mixed all together, usually spread on hot toasts, Crescentine or Crescenta.
Friggione:  a tomato and onion sauce usually intended for dipping bread as a starter or a side dish.

Here we enjoyed the delightful Bolognese cuisine !
Now I’m waiting for you to discover something more about this wonderful city!